Noir film costume design is often gone uncredited – but that doesn’t mean we can’t appreciate it. The San Francisco Silent Film Festival comes this weekend to the Castro Theatre in San Francisco, and one of its presentations is a Noir film called The Woman Men Yearn For, starring Marlene Dietrich.

Via the Film Noir Foundation newsletter: 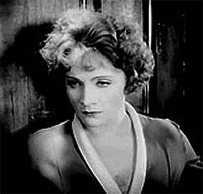 “Before she shot into stardom with Josef Von Sternberg’s The Blue Angel (1930), Marlene Dietrich had a brief career in German silent films. The Film Noir Foundation is proud to co-present one of these rarely screened films, Kurt Bernhardt’s The Woman Men Yearn For (1929) at this year’s San Francisco Silent Film Festival. On his way to his honeymoon, a young industrialist encounters a seductive beauty (Dietrich), traveling with a mysterious male companion. When she begs the young man to help her, events spin out of control. For more information on the festival, running July 14 through 17, visit the SFSFF website.” See the full lineup here

On a related note, the Marelene Dietrch Collection Berlin includes a huge selection of her clothing and accessories. Those looking to research her film costume and offf-screen style should probably start here. The collection includes:

Tuesday Teaser: Ballet, Rodarte, and the Kingdom of Style