Some readers will be familiar with my good friend, Katie Netherton, who has previously written guest book reviews for me elsewhere. Katie earned her Masters degree from New York University in Visual Culture: Costume Studies in 2002. Most recently she worked on the historic documentation project at the Brooklyn Museum and the Gordon Conway archive at The University of Texas’s Harry Ransom Center. 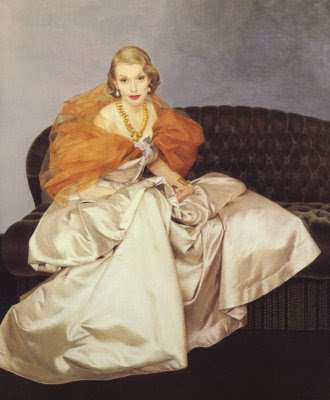 Millicent Rogers in Charles James (Via Stirred, Straight Up, with a Twist Blog)

While we were at NYU, Katie researched and wrote a paper on Millicent Rogers and was in fact the one who brought this book to my attention almost a year ago. The Wall Street Journal recently discussed the book in an article titled “She Wore it Well.” It was also recently tauted in Women’s Wear Daily, who points out this tasty tidbit about Rogers: “When she moved to Hollywood in 1946, Rogers stayed at Valentino’s former house, Falcon’s Lair” and reminds us of her strong connection to the master American couturier, Charles James. The author of Searching for Beauty, Cherie Burns, who recently guest blogged for Huffington Post on the connection between Charles James and Millicent Rogers, has a number of upcoming events scheduled for September and October in Taos and Santa Fe, New Mexico, including the Millicent Rogers Museum.

I’m very pleased to share with you Katie Netherton’s review:

Cherie Burns’ new book, “Searching for Beauty: The Life of Millicent Rogers,” explores the life of style icon Millicent Rogers, a fashion risk taker, art collector, jewelry maker, elegant decorator, and pinnacle of taste and flair. The author seeks to reveal Rogers’ character instead of strictly talking about her style and fashion sense, as many of the previous writings on Millicent Rogers have done. It’s refreshing, and well-deserved. Besides her impeccable collection of fashion and relationships with several important designers, Rogers had many accomplishments worth discovering as well. She was extremely creative and spent her life looking for ways to express herself. She was also very generous, with both her time and resources. She was a mother, a daughter, a wife, and an independent woman in a time when many women strictly followed the rules.

At times, Burns’ writing can seem disjointed, as if snippets from The New York Times and The Washington Post society columns were cut and pasted. But, no author has done such an in-depth job when it comes to sorting out the (sometimes hard to believe) details of Rogers life. Because so many of the well-known stories about Rogers seem to have been passed down over time without a known source, they seem more like legend than fact. By using first-hand accounts from family and friends, including time spent perusing unpublished family photographs, the author is able to shed some light on Rogers’ life and develop her character for the reader. There is little written about Rogers’s personal life, particularly about her personality. Time consuming as I’m sure it was, Burns has done an impeccable job bringing her to life.

Mary Millicent Rogers was born into a prosperous family. Her father, Henry (Harry) Huttleston Rogers, Jr., was the only son of Henry Huttleston Rogers, who along with William and John D. Rockefeller, presided over Standard Oil. Her mother was Mary Benjamin, also from a prominent family. Burns dives right in exploring Millicent’s debutante years and her several marriages and divorces over a short period of time. This well-researched section of the book is filled with quotes from various newspapers and family recollections. This time in Rogers’ life developed her sense of independence, but also reinforced her tie to her family’s money.

Burns slogs through Rogers’ marriages to Austrian Count Ludwig Salm von Hoogstraeten, Argentinean ArturoPeralta-Ramos and American Ronald Bush Balcom. Rogers had three children: Peter with Salm and Arturo and Paul with Peralta-Ramos. Her last marriage to Balcom ended in 1941. Although she never married again, Rogers had several relationships with public figures such as Ian Fleming, Roald Dahl and Clark Gable. Burns delves into these relationships as well, providing clarity where no other work on Rogers does.She paints a picture of an independent woman who was never fully satisfied with one man, one location, one of anything. It wasn’t that she didn’t love her husbands (or her lovers), but that she was always on the move to what was next, what would open her world just a bit more, whether that was a new relationship or a new house. Burns writes about Rogers as a real person, with heartaches and failed relationships, family dysfunctions and complicated mother-son relationships, and at the end of the day, a woman on a life-long quest for happiness.Burns does an excellent job unearthing Rogers’ generosity. Whether it’s her involvement with recuperating soldiers at her house in Virginia during World War II or her efforts to support the work of the Indians of Taos, she could be selfless when it came to her time and money. She was always willing to help, and seemed to feel that it was important to offer her resources for good.

It is enjoyable to read about Rogers’ time in Taos, particularly since Burns lives in Taos herself. The reader can truly see the author’s love for her home. It lends an air of truth to her description of how Rogers must have felt upon her arrival at the Western outpost. Rogers’ time in Taos, although short, seems to be where she felt most at peace. The rheumatic fever she caught as a child and that plagued her throughout her life was beginning to catch up with her. Her untimely death at age 50 brought her adventurous life to an end. She never once let her fragile health get in the way of exploring new vistas. She was buried in Taos, wrapped in an Indian blanket and wearing some of her favorite Indian jewelry that she had been so avidly collecting. A fitting resting place for an extraordinary woman.

Burns includes a bibliography, never before seen photographs and extensive endnotes, all helpful for those interested in Rogers’ life. She gives Millicent Rogers the kind of attention she deserves, and now her life can be remembered not only for how stylish it was, but also for its generosity, vivacity and kindness.

The Glass of Fashion by Cecil Beaton, London: Artillery House, 1989.