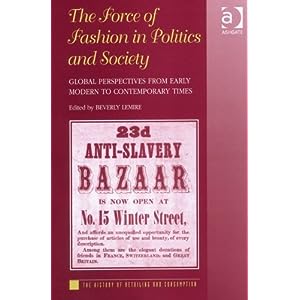 Beverly Lemire, Professor of History and Henry Marshall Tory Chair at the University of Alberta, recently edited a new research resource, The Force of Fashion in Politics and Society: Global perspectives from Early Modern to Contemporary Times in The History of Retailing and Consumption series with Ashgate Press. It provides ten essays in three sections, that were developed out of a panel at the International Economic History Congress, Hesiki in 2006. That session focused on “Fashion, Material culture and Economic Life: Perspectives Across Time, Place and Politics.”

Here is a bit more on the volume, taken from the introductory chapter, written by Beverly Lemire:

“This interdisciplinary volume contributes to a wider comparative assessment of fashion, a multi-facted phenomenon, expressed in various cultural forms. Fashion as a catalyst of material change, as a visible sign of distinction, has a complex past and an equally dynamic and contentious present. Though fashion’s impact is not restricted to dress, the ebb and flow of clothing styles have historically been the most controversial of all the practices in virtually every cultural community. Political economies and cultural discourses of fashion present equally fertile dynamics, having shaped industries, defined communities and sparked conflicts. yet, the study of fashion is still not comfortably situated within all precincts of the academy. This omission is illustrated, for example, in a recent volume on global history; the absence of ‘fashion’ in the subject index reflects the still partial recognition of this pivotal topic, despite the fact that the themes addressed in this text, like the global trade in sugar or the industrialization of textile production, were themselves shaped by the social and cultural forces of fashion in various regions of the world. Scrutinized and problematized in some academic quarters, fashion is ignored and disdained in others reflecting the historic discomfort with the result. At the same time issues surrounding expressions of fashion have frequently been highly politicized. Gender, institutional and imperial politics were among the dynamics that shaped the scholarly reception of this subject, leading to its acceptance (or rejection). However the tide is turning and the intricate cultural and economic forces underlying this phenomenon are more broadly recognized. The chapters included here reflect this new scholarly trajectory reclaiming fashion from the margins, exploring its cultural, economic and social force across time and place. Fashion has shaped markets, defined material priorities and brought profit or loss to its mediators; the fashion for one commodity over another defined consumer markets. These and other topics are explored in this collection.”