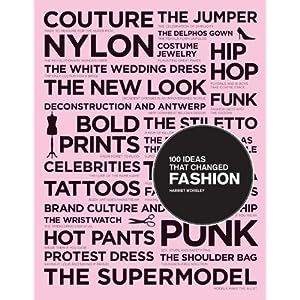 Covering 1900 to the present,  100 Ideas that Changed Fashion by Harriet Worsley provides a creative and concise overview of fashion history. It is a part of the “100 ideas” series from UK publisher Laurence King (distributed by Chronicle Books in the US). Other books in the series will discuss architecture, graphic design and film.

In 100 Ideas that Changed Fashion, author Harriet Worsley provides very brief, but highly illustrated entries arranged chronologically. This title is similar in structure to a number of small but sweeping overviews of fashion history, including:

This new work not only brings us up-to-date (2010), but also presents the history from a unique vantage point. To quote Worlsey’s introduction, “each idea had to be something that rerouted the course of fashion and without which womenswear would not be what it is today.” (6)

The end result is a well-curated and highly synthesized work presenting not only key inventions (such as nylon and the zipper), but also their trajectory: That is, how these ideas shaped and changed future fashion along a timeline. Politics, economics, material culture and history also played key roles in the selection of entries. While some of the entries are tride-and-true staples of fahsion history texts (“Bias Cut,” “Little Black Dress,” “Chanel No. 5”), other entries are unexpected, more inclusive and decidedly welcome (“Protest Dress,” “False Eyelashes,” “Raw Photography,” “Logo Worship,” “Deconstruction and Antwerp,” “Dance Dress,” and “Black is Beautiful”). These new additions provide a breadth and depth of history – especially in regards to ethnic diversity that is often missing in similar works.

This is not to say that the book is without problems – a lack of footnotes and skimpy bibliography are two notable issues for the die-hard  historian. There are also some odd repetitions between entries (such as separate entries for “Celebrities” “Hollywood and the Talkies”, and “Pop Stars” as well as “Influential Street Fashion” and “Streetwear”). Conversely, there are entries that might be a little too sweeping (“Sport,” “Hip Hop,” “Global Influences,” and “The Internet”).

These issues notwithstanding, 100 Ideas that Changed Fashion furthers the ongoing conversation about fashion history’s most significant contributions. It is a welcome addition to the body of literature aimed at making material culture and fashion history digestible to an average reader .

Here’s a brief sample to wet your appetite:

Where would flirtatious brides and red-carpet beauties be today without their false eyelashes? Some of the first falsies were created in 1916 by the American film director D.W. Griffith for his leading lady, Seena Owen.

He wanted her lashes to be so long that they brushed her cheeks when she blinked. Griffith asked a wig-maker to attach some interwoven human hair to a fine piece of gauze, which was glued to her eyelids. The effect was extraordinary.

However, it was not until several decades later that false eyelashes really took off for the woman on the street. They became popular in the 1950s, and by the 1960s were a fashion essential. Lipstick was worn pale, meaning that he focus of the face had to be a pair of childlike wide yes. The waif-like supermodel Twiggy often wore false eyelashes above and below her eyes, or sometimes attached to her bottom lashes alone. The model Jean Shrimpton and actresses Marianne Faithfull, Sophia Loren , and Elizabeth Taylor were all renowned for their luscious lashes, and the singer Dusty Springfield became known for her ‘panda-eyed’ look.

The 1960s versions were made of bristle-like plastic: Their staying power was limited, and they tended to fall off. Salvation came in the 2000s when the Japanese invented individual fake lashes that could be glued on to real eyelashes, one by one. These were like hair extensions for the eyes, lasting up to two months. Today false lashes are as popular as earrings and lipstick. Shu Uemura created a set of paper-clip style lashes with Dutch fashion designers Viktor & Rolf, and in 2009 the UK band Girls Aloud launched their own range of false lashes in collaboration with Eyelure. Flirting has never looked so good.” (55)