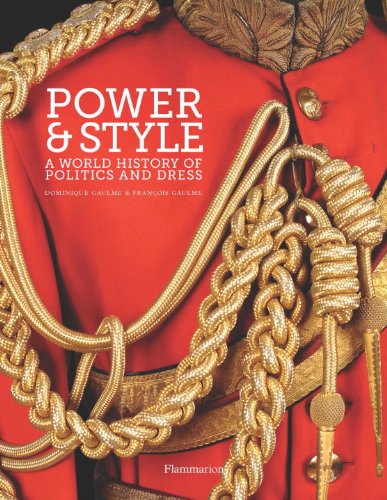 Today, I’m pleased to bring a book review of review of  Power & Style: A World History of Politics and Dress By Dominique Gaulme and Francois Gaulme (Translated from the French by Deke Dusinberre) from a dear friend. José Blanco F. is an Associate Professor in the Textiles, Merchandising and Interiors Department at the College of Family and Consumer Sciences and manager of the college’s Historic Clothing and Textile Collection. He is originally from Costa Rica and has a Ph.D. in Theater from Florida State University. His current research focuses on dress and popular culture in the second half of the twentieth century with an emphasis on male fashion. He is also interested in the fashion and visual culture in Latin America and the application of Jungian archetypal analysis to fashion. José is the Vice-president of Education for the Costume Society of America.

Here is his review:

Power & Style: A World History of Politics and Dress is a new book written by French journalist Dominique Gaulme and anthropologist and historian Francois Gaulme. It was translated from the French by Deke Dusinberre. This volume adds to the expanding literature discussing the history of dress and fashion from a global perspective. The authors emphasizes the role of dress as a symbol of power through history and discusses a variety of settings from tribal communities to monarchs and elected officials.

The work is organized chronologically in an easy-to-follow format with a vast number of illustrations for support. There are two main problematic issues with the authors’ approach. First, the authors almost exclusively discuss political power concentrating on individuals declared powerful by either a political system (Kennedy, Reagan) or themselves (Napoleon, Hitler).

The book, thus, equates power exclusively with politics and government institutions and ignores other power systems; not discussing, for instance, the impact of corporate power dressing and personal appearance management as well as the power achieved by celebrities in a variety of fields and how they exert a powerful influence through their wardrobe. Second, and more important, is the authors’ decision to include very little discussion on influential women and justifying the decision by stating that “… women’s access to legitimate political power is very recent.” Therefore the book virtually ignores women who have been powerful monarchs and rulers mostly casting aside an extensive list ranging from Cleopatra, Elizabeth I, and Queen Victoria to Golda Meyer and Indira Ghandi. These women, along with many others, held political power as appointed or elected rulers and cleverly used their appearance and dress to express and symbolize their authority. For instance, the authors choose to discuss the “Victorian” era by analyzing Prince Albert’s wardrobe in detail and just briefly mention Queen Victoria thus assuming that sartorial power at that time was mostly expressed through male dress.

So, the book would be better titled and promoted as what it really is: a history of men’s fashion told from the perspective of the connection between power, style, and dress. Once the reader accepts that limitation, then the work becomes an enjoyable read. The authors lay out a good case for the argument that dress plays functions that go beyond mere protection of the body and that decoration and indication of status are primary functions.

The authors develop connecting threads with pertinent examples in each chapter, easily capturing the attention of anyone new to dress history but they also provide a purposeful synthesis of the topic and a variety of relevant details for experts and students in the field.The book is lavishly illustrated in full color and often full page images in high quality reproduction that sometimes jump from the page almost as an actual canvas. There are numerous portraits of subjects discussed in the book, but in almost every instance the illustrations should be more directly related to and referred in the text with more specific descriptions of dress and sartorial symbols in the portraits selected to illustrate the chapters.

The historical research is thorough; the book is well organized and narrated in an appealing manner with elegant descriptive language that easily transports the reader to the places and periods described. The chronological approach cleverly and effectively carries the reader from what the authors call “naked societies” where the right to wear certain objects such as feathers was a symbol of power to ancient Rome and Byzantium. The authors, for instance, paint a clear image of Augustus in Imperial Rome, calculating the precise fullness of his toga as a way to manage the full transition of Rome from Republic to Empire, or Hitler rummaging in his mind about ways in which his adoption of modest forms of dress could distinguish him from the spectacular uniforms formerly used in Germany. It is then in the storytelling and sharing of anecdotes and factoids that the book is stronger.

Powerful male figures through history are highlighted as examples, including Constantine, Philip the Good, Louis XIV of France, and Charles II of England. Famous dandy Beau Brummell is one of the few men discussed in the book whose sartorial power did not arise solely from political power but from social power as Brummell promoted the idea of dressing as a moral exercise in simplicity and elegance.

Other notable figures discussed include Napoleon, Prince Albert, and Edward VII, who is portrayed as a man so passionate about clothing that he was often considered vain and wasteful. The book argues that Edward VII had a remarkable impact on the development of cosmopolitan wardrobe to accommodate twentieth century active lifestyles. Once the book reaches the twentieth century, however, it rushes in one chapter from Hitler to Mao emphasizing how totalitarian regimes and their leaders used dress as a symbol of power.

American style is discussed in one chapter, with John F. Kennedy marked as a leading figure in the casualization of the American look and the development of the country’s obsession with comfort and muscularity.  Most of the book emphasizes European and American trends and although one of the last chapters is titled: “The UN: Going Global” it still discusses current trends in men’s dress by analyzing two opposing schools of masculine elegance in the closing decades of the twentieth century: the English tradition with structured pieces and an air of formality, and the Italian tradition with lighter fabrics and cuts emphasizing the male body. The chapter also discusses the transition at the United Nations from representatives attending in their countries’ traditional or representative attire to a general acceptance of business attire.

The book closes with two chapters discussing current and future trends. The authors revert to the idea that women did not occupy positions of power until the twentieth century and expect the reader to be surprised upon receiving this information. Still, with a long list of powerful women in the twentieth century, the book devotes just mere sentences to some of them (Margaret Thatcher, Hillary Clinton, Benazir Bhutto, Angela Merckel) and ignores other powerful females such as Eva Perón and a long cast of female heads of state in Latin America and other areas of the world. The final chapter aims to predict how the relation between power and dressing will evolve in the future. The authors also include smaller sections at the end of each chapter discussing different elements of clothing and the function they have played throughout history in determining power and status for men. These sub-chapters include a wide range of objects such as the penis sheath, crowns, swords, cravats and neckties, top hats, whiskers, scepters, boutonnieres, and watches.

Overall the book is an enjoyable read and, as stated above, the illustrations are multiple and of high quality. It adds to the growing literature on men’s fashion and style. Perhaps to solve the issue of ignoring powerful women; the authors should compose a second volume addressing how women have used dress and style as a symbol and instrument of power through the ages.”

Knitting on the homefront (WWI)