Looking ahead to Fall Books on #FashionHistory In the world of publishing, it is a very busy time (hence my lack of posting anything for the last month). Publishing houses are busily confirming books to be released for the fall season, and to be presented to booksellers (and media) at Book Expo America at the end of May in New York (coincidentally and always timed for the same time as the Costume Society of America’s National Symposium).

So – I’ve been trolling the virtual shelves of new material to see what we’ll have in September and thought I’d share a ‘sneak peak’ of what is to come. With any luck, I’ll be reviewing a few of these in more depth once the books are out!

Most exciting of the fall books this year – for me anyway – is a new monograph of Jean Patou published in collaboration with the Patou estate. The main draw is the previously unpublished family archives, that include include rare examples of design, fashion sketches, fabric samples, and private photographs. Titled Jean Patou : A Fashionable Life and available September 24, 2013, the book is authored by  Emmanuelle Polle an author and historian who  curated an exhibition on Christian Bérard at the Musée d’art moderne Richard Anacréon in Granville, France, in 2011.
The description reads: 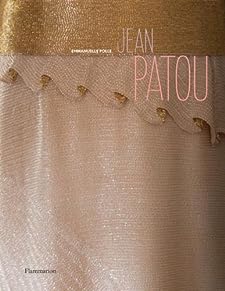 Of course there is lots of talk about “Gatsby” now, and the book trade can sometimes be slow to respond. Fashion in the time of the Great Gatsby will be out on September 24, 2013 by LaLonnie Lehman, a professor of Theatre at Texas Christian University at Fort Worth ( she is a member of the United States Institute for Technical Theatre and the Costume Society of America). The book’s official description reads:

The post-WWI world saw cultural, political and technology explosions that lead the way to fashion becoming a highly personal and social statement. The Roaring ’20s, exemplified by F. Scott Fitzgerald’s literary classic The Great Gatsby, ushered in a new era of liberation in dress for style, comfort, movement, expression, and attraction. This book chronicles the story of this milestone era in fashion history and spans the entire wardrobe for men and women, including day and evening wear, accessories and brand new categories such as “casual clothes” and “fads” like smoking jackets, tiaras, and cigarette holders. Written by a noted academic in fashion history and a costume designer herself, it is beautifully illustrated with period photographs and fashion sketches that are highly evocative of the period and the stylish world of The Great Gatsby.”

These two titles are the most exciting to my mind, but there were some other fall books that grabbed my attention:

More to come on these and other titles as they are released!

The Wednesday Word: from Mendes and De La Haye

“Alamo a la Mode: Defending the Importance of Dress” in #SanAntonio