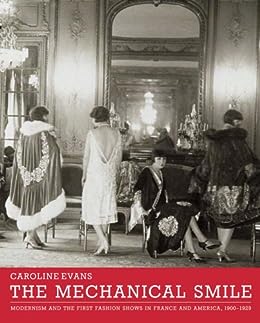 Many of you will know that I’ve been doing a lot of research into the history of fashion in America. Happily, well-known historian Caroline Evans came out with a book this summer that fills a gap in the available research on early fashion shows. Her book, The Mechanical Smile: Modernism and the First Fashion Shows in France and America, 1900-1929 (Yale, July 2013) actually covers the 1890s through 1929 in both France and the United States, and relies on significant new archival evidence. It not only includes close discussions of early fashion shows, but also their impacts on dance and early cinema.

Twelve chapters divided evenly between discussions of fashion shows and of mannequins (models), this large format, 330 page book is heavily illustrated, and as a good resource should, includes endnotes, a bibliography, and an index. For my purposes (i.e. American fashion history), Chapter 4: 1900-1917 America was insightful and well-documented.

As is the premise of Marlis Schweitzer’s book, When Broadway Was the Runway, Evans spends some time discussing the theatrical connections of the first fashion shows in the US, especially the appeal they held for Broadway and Vaudeville producers. This included a two-week show in September 1903 at Madison Square Garden (more of a static convention than what we now think of as a fashion show) which included live fashion shows of French only designs (no American designs). Evans goes onto to describe the first department store shows – which also only showed French designers – including Wanamakers’ Napoleonic themed fashion show in 1908, Poiret’s American tour of Macy’s, Gimbel’s and Wanamakers in 1913, as well as these store’s own shows beginning in 1910. Not surprisingly, Lucile (Lady Duff Gordon), her models, and their New York presence are also well covered (and well illustrated). Here, FIT’s special collection of Lucile related ephemera plays heavily.

The next section of the America chapter explores the rapid spread of fashion shows across the US (and across markets) after these early beginnings. Evnas notes, “From 1910 fashion shows began to be staged twice a year in Los Angeles and San Francisco, collectively organized by the major department stores and called the United Fashion Show.” The chapter goes on to talk about theatricality in American fashion shows: theme’s, dramatic structures, and other elements that American shows used to appeal to buyers and consumers.

Evans’ three year fellowship to research and write the book certainly paid off. Her endnotes alone reveal how much research she did for this project, and the results are drool-worthy. She catches all the details one might need to learn more about a particular nugget in this fact-packed resource. I’ll certainly be using it as a resource for years to come.

History of the Nightingale, 2 years in the making, now for sale online!