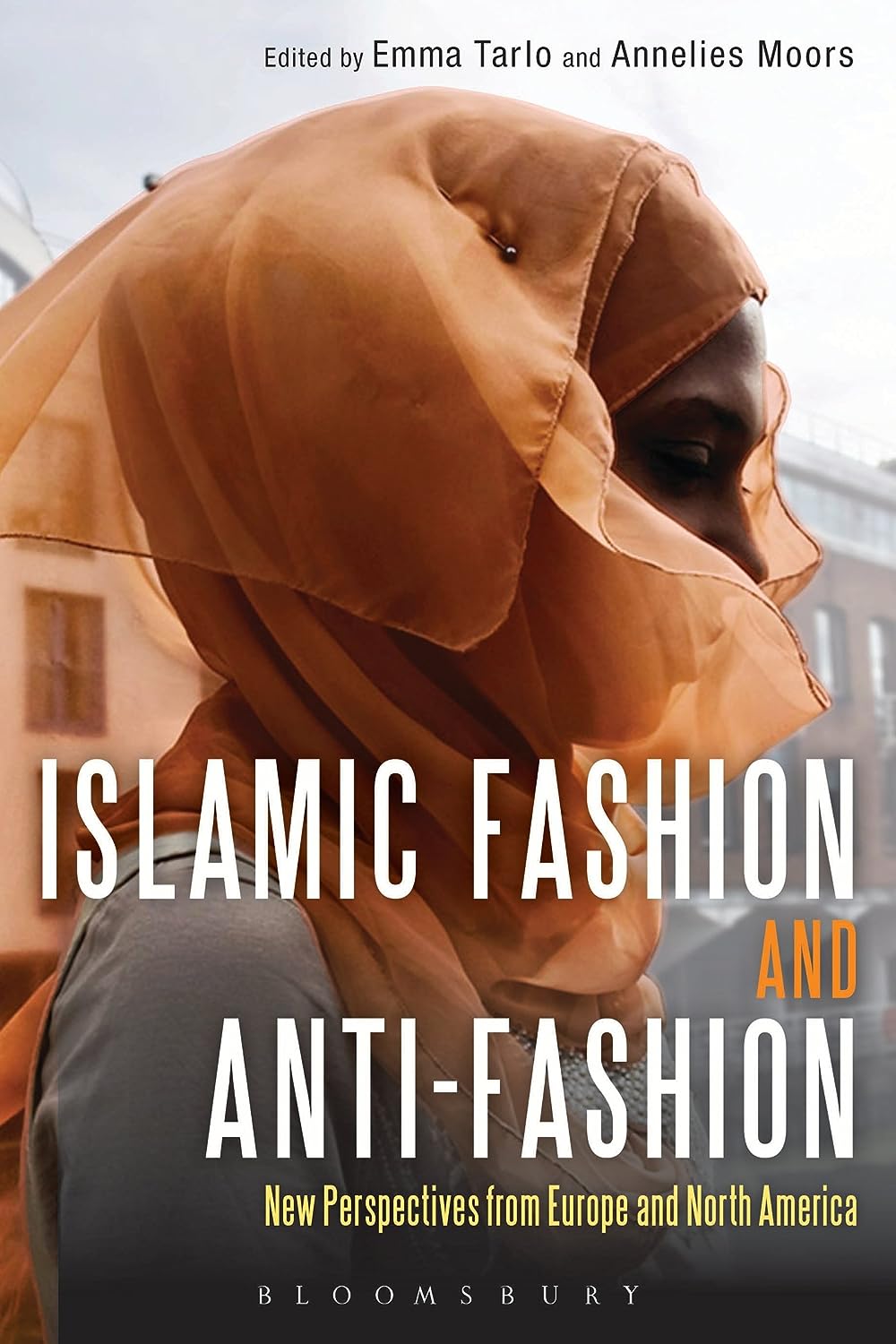 There are moments I think we’re beating this horse to death. I worry that we are still far too fixated on the hijab (veil) and on Muslim women’s dress, though we should be turning our gaze toward other, more pressing issues that profoundly affect women: e.g., poverty, war, and environmental degradation. Will we ever be content to let women dress as they choose without judgment or comment?

Islamic Fashion and Anti-Fashion: New Perspectives from Europe and North America is an essential collection that fulfills a great deal of scholarship. It features sixteen essays covering history, anthropology, sociology, and fashion studies.  Editors Emma Tarlo and Annelies Moors have written an excellent introduction, particularly in its discussion of how dress affects religiosity and piety, how fashion relates to assimilation and creativity, and the politics of so-called Muslim dress or “the performative power of the headscarf to make identity claims and political demands,” as Rustem Ertug Altinay puts it in his chapter “Sule Yüksel Senler: An Early Style Icon of Urban Islamic Fashion in Turkey.” Tarlo and Moors remind us that Muslim women are habitually perceived as shrouded and silenced and that their coverings often seem to prove they are merely “agents of barbarism,” as Canadians A. Brenda Anderson and F. Volker Greifenhagen write in “Covering up in the Prairies.” Yet within the bounds of “proper” Muslim dress, there is vast, sophisticated sartorial ingenuity and, as Tarlo calls it, “the agency of the hijab.” (Unfortunately, too much sensational focus on the hijab also robs women of their agency.) The editors write that the “book grows out of awareness of the discrepancy between public discourses…and actual developments…pointing to the need for greater understanding and more nuanced interpretation.” Indeed.

Altinay’s chapter about Turkey pushes the book’s self-ascribed Europe boundaries, but Banu Gökanksel and Anna Secor bridge the gap with “Transnational Networks of Veiling Fashion Between Turkey and Western Europe.” Many Europeans are ethnic Turks, many whose families arrived generations ago as guest workers. Maria Curtis addresses Turks in the United States with “Closet Tales from a Turkish Cultural Center in the ‘Petro Metro’, Houston Texas.” Altinay offers essential historic ballast (with kudos to Audrey Hepburn), for one thing, helping to explain how the headscarf was enthusiastically re-inaugurated into a society that was mandated by its leadership to be secular.

Most interesting are those essays about unfamiliar, rarely noticed practices and challenges, like  Daniela Stoica’s “The Clothing Dilemmas of Transylvanian Muslim Converts” or Katarzyna Górak-Sosnowska and Michael Lyszcarz’s “Perspectives on Muslim Dress in Poland: A Tatar View,” a study of the Tatars’ distinctive, traditional uses of the headscarf as they encounter a new (and often insistent) interpretation of Islam.

Annelies Moors’ “Fashion and its Discontents: The Aesthetics of Covering in the Netherlands,” Synnøve Bendixsen’s  “‘I Love My Prophet’: Religious Taste, Consumption and Distinction in Berlin,” and Connie Carøc Christiansen’s “Miss Headscarf: Islamic Fashion and the Danish Media” look to the entanglements of belonging, social conflict, politics, gender, and sexuality (among other things).

I once asked Reina Lewis – who, like Leila Karin Österlind with “Made in France: Islamic Fashion Companies on Display,” examines merchandising in “Hijab on the Shop Floor: Muslims in Fashion Retail in Britain” — whether the trend among Euro-American women combining trousers with dresses was related to the beautiful salwar kameez, a customary costume in South and Central Asia. She thought it more likely to be a retro-hippie craze. I’m not so sure, because, as we see in various chapters of this book, and in Tarlo’s previous work, contemporary Islamic fashions, increasingly distanced from indigenous clothing, are so modish, attractive, elegant, fun, and streetwise that even young non-Muslim women could find them irresistible. But would they also wear hijab?  Well, that might, at the very least ─ at last ─ render all this who-wears-what fuss moot.

Jennifer Heath is an independent scholar, award-winning cultural journalist, critic, curator, and activist, the author or editor of eleven books of fiction and non-fiction, including On the Edge of Dream: The Women of Celtic Myth and Legend and The Echoing Green: The Garden in Myth and Memory (both from Penguin/Plume, 1998, 2000), A House White With Sorrow: A Ballad for Afghanistan (Roden Press, 1996),  The Scimitar and the Veil: Extraordinary Women of Islam (Paulist Press, 2004), The Veil: Women Writers on its History, Lore, and Politics (University of California Press, 2008), Land of the Unconquerable: The Lives of Contemporary Afghan Women (University of California Press, 2011), co-edited with Ashraf Zahedi, and also with Zahedi, Children of Afghanistan: The Path to Peace (University of Texas Press, 2014), as well as The Jewel and the Ember: Love Stories of the Ancient Middle East (Smashwords E-Book Publications). She came of age in Afghanistan, founded Seeds for Afghanistan in 2001 and in 2003, the Afghanistan Relief Organization Midwife Training and Infant Care Program, later International Midwife Assistance. Her many touring exhibitions include Water, Water Everywhere: Paean to a Vanishing Resource, The Veil: Visible & Invisible Spaces, Black Velvet: The Art We Love to Hate and The Map is Not the Territory: Parallel Paths-Palestinians, Native Americans, Irish.

FashionHistoria: One Year and Counting . . .

The Future of Tradition: Weavers of Oaxaca, Mexico Connect Their Future with Their Past