Exposed: The History of Lingerie explores a fashion story that often takes a secondary place in the fashion history—what’s been worn underneath our clothes. These are the pieces that give our bodies the current fashionable silhouette or the clothes we wear for our most intimate moments in bed or lounging at home. Curator Colleen Hill has been fascinated with lingerie since 2008 when she curated Seduction, an exhibition that focused on the erotic nature of fashion. Through the intervening years she kept track of the Museum’s lingerie collection, which occupies the back of its huge clothing storage area. Her interest intensified when the Museum acquired several beautiful collections of custom lingerie, with pieces that were marvels of beautiful details and exquisite craftsmanship. The result is a fascinating exhibit of intimate wear from the eighteenth century to the present.

The first thing one sees in the Museum’s vast lobby is a platform with five underwear ensembles designed by the 2014 BFA students of FIT. Hill told me she decided these garments should provide the prologue to the exhibit because the students’ work was so professional. In the outside entry case stands a mannequin in a witty 1994 Moschino evening dress with a pouf skirt made entirely of 20 black underwire bras complete with their dangling shoulders straps.

But it inside that the real spell of the exhibit takes hold. Mounted on the first platform is a raspberry colored satin corset from around 1889 that glows like a jewel in the low light. Hill told me this corset surprised her for several reasons. One, it was an early example of colored lingerie, which was just becoming acceptable. Even more important, the corset’s bones were made of coraline, a plant based material that was probably more comfortable to wear than the steel bones common at the time. That meant it was probably marketed by Warner Brothers as a “healthy” garment for the stylish woman. The corset shares the platform with a Peter Sorensen evening dress from 2007 with a corset bodice and another jewel-colored corset from the 1850s, this time in blue satin.

Throughout the exhibit garments are often paired, making it possible to see how the intimate “under” garment was morphed into an “outer” garment. For example, an Empire line nightgown from the 1950s is paired with a Claire McCardell evening gown from the same decade, both in the new wonder fiber—nylon. A princess line slip from 1910 replete with eyelet trim stands next to the lingerie dress—a glorious confection of white eyelet and sheer muslin.

The panorama continues. In the next room is an eighteenth century corset with tie-on sleeves. Such a garment could be worn as outerwear. Next to it is quilted petticoat, which would have been visible too. A lady would pull her overskirt and tied it up, so she could show off the petticoat’s elegant stitch patterns To remind us of that an eighteenth century lady was expected to stand straight, whalebone busk from the 1780s lies in a case in front. This piece would have been inserted into the corset in a place provided between the breasts to keep the wearer erect and stately.

Amid all the elegance and couture work are two companies from the present day that show us how lingerie still fascinates women today. Both Victoria’s Secret and Hanky Panky give the consumer fashionable linger at an affordable price. Hill was also impressed by Hanky Panky’s ethical standards of production in these days of concern over sustainability. But how can one forget that Hanky Panky claims to produce the “worlds most comfortable thong” for a wide range of sizes? There it is–in a colorful three pack!

Another notable company is Cadolle of Paris, a family-owned firm still producing beautiful ready-to-wear and custom lingerie after 5 generations. Founded in 1889 it pioneered innovative brassiere designs and is one of the few companies to produce custom lingerie today. On view is a baby doll nightgown and corset in pink lace.

One of the loveliest lingerie styles was the tea gown, a robe that women of the nineteenth and early twentieth centuries wore to relax and entertain in the privacy of their homes. Hill chose several to display. There’s an early white cotton and lace dressing gown from the 1850s that hides the body under its generous cut. By 1900 the robe was an alluring confection of chiffon, silk and lace. The Fernende Burel gown on display is accented with silk roses placed strategically on each breast! Next to it is an elegant brown silk hostess gown hand printed with gold by Suzanne Bertillon from the 1920s and a Delphos dress which, we are reminded, was originally designed to be worn as tea gown without a corset.

It’s a stunning array that continues with choice examples that bring the exhibit to the present day with the Wonderbra from 1994 and the overtly sexual style of Agent Provocateur. One of the joys of this exhibit is the simplicity of the exhibit layout. It has been well edited, so that the garments are clearly visible without excess clutter. After following the styles of fashionable dishabille, we know that lingerie and the urge for special underwear is something that has continued through the centuries. What’s next?”– Nadine L Stewart

Exposed will be on display till November 15th. On Thursday, November 6, Curator Colleen Hill will host Poupie and Patricia Cadolle in a conversation about their unique family-run business. Admission is free, but reservations are required. Register online. 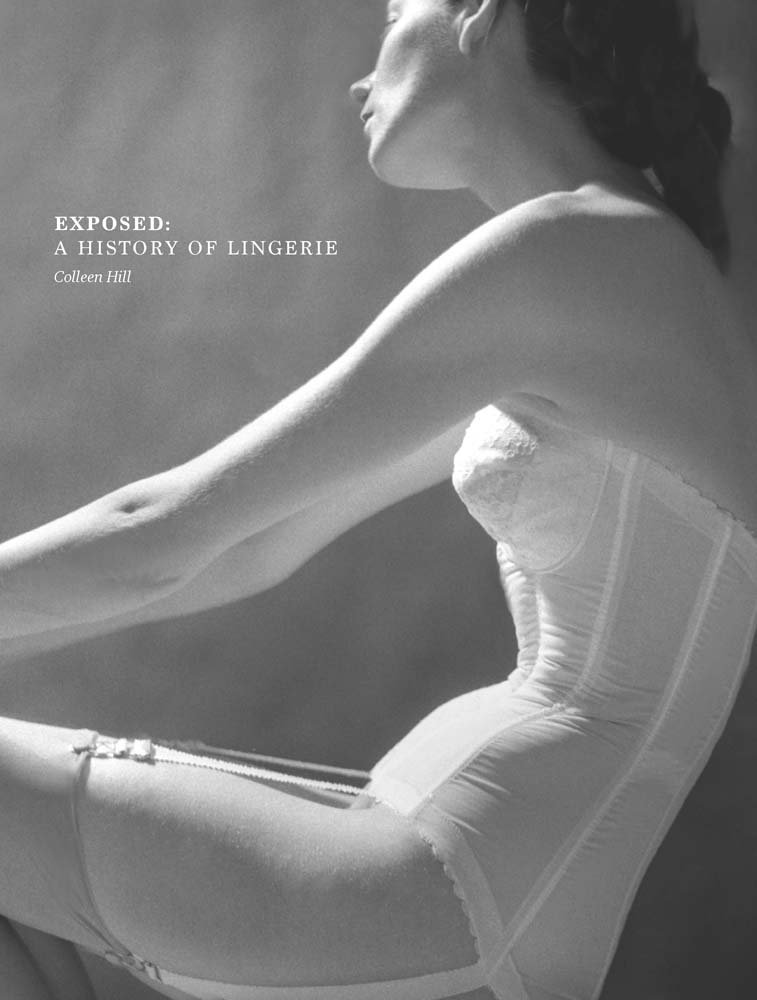