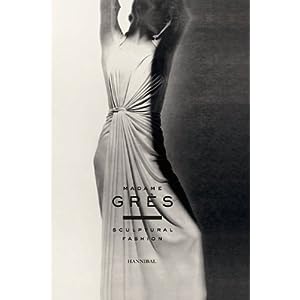 The book Madame Grès: Sculptural Fashion commemorates the ever-ephemeral fashion exhibition of the same name (which closed at MoMu Fashion Museum, Province of Antwerp in February of this year) and adds to the growing body of knowledge on this important twentieth-century designer.

Often re-interpreting classical Greek sculptural forms, and best known for her classical draping and pleating, Madame Alix Grès (1903-1993) was inspired by the body and was fiercely dedicated to her work. Though active from the early 1930s (as Alix Barton), her career as Madame Grès began when she opened a couture house under that name in 1942. Her clients included the likes of the Duchess of Windsor, Marlene Dietrich, Greta Garbo, Jacqueline Kennedy, and Dolores del Río.

With this volume, Olivier Saillard, director of Galliera, The Paris Museum of Fashion, adds his name to the prestigious list of fashion historians who have documented the work of Grès. Previous books have been penned by such fashion history giants as Richard Martin and Harold Koda of the Metropolitan Museum of Art (Madame Grès 1994) and Patricia Mears of the Fashion Institute of Technology (Madame Grès: the Sphinx of Fashion, 2007).

Madame Grès: Sculptural Fashion is a wonderful resource for historians already familiar with her history and who are looking to add further to their libraries. It documents the garment and sketch collections held at the Galliera, while offering the best of the details of her career including: insights into her public persona, her relationship with the media, her opinions on exhibitions of her work planned during her lifetime (they weren’t positive), her design process and philosophy, and much more.

The 216-page-book is full of photographic evidence of her work, as well as some photos of work she inspired other modern designers to create (Jean Paul Gaultier and Yogi Yamamoto among them). The “Couture Studio” section of the book presents photographs of some sixty extant garments created between 1933-1988 (with captions at the back of the book), followed by a section of contemporary high fashion photographs of Grès work.  A selection of the 2,800 sketches/illustrations donated by the Pierre Bergere – Yves Saint Laurent Foundation leaves you wanting more and a section called “Biography” presents a sort-of annotated narrative chronology interspersed with illustrative images. Despite all of the material included, I found the book’s small trim size and layout too be somewhat awkward –many images occupied only the top half of a page in a smallish size, making many design details difficult to see. This left the bottom third of the page more-or-less blank, yet captions were at the back of the book. This design made little sense to me.

Despite these few shortcomings, I’d recommend this book for the true fashion historian, museum fashion curator, libraries with strong fashion sections, and the devoted enthusiast.

Look inside the book: