Revisiting a “mini history of the maxi dress”

Jezebel is re-promoting a maxi dress article they published in 2015 that mentions something I’d written on the subject from 2008.  The 1,000+ comments (and counting) on that post are a gold-mine in terms of how attitudes have changed in just four short years.) In the nearly 11 years since I wrote on the maxi, the dress has maintained its perennial prominence in the summer zeitgeist. In my article for Monica Sklar’s former Worn Through blog, I said

“One of the earliest appearances of the “Maxi-Dress” was in 1968. The New York Times highlighted a cotton lace version by Oscar de La Renta he created for Elizabeth Arden Salon. More notable designers such as YSL, Dior, Cardin, Biba, Halston, and others would latch on to the style as well. Maxi-lengthed skirts had begun to outdo the mini skirt in 1967, and the dress (as well as the maxi coat) soon followed. Maxi styles quickly grabbed hold in London. Doctor Zhivago (1965) is often credited with igniting the craze for the Maxi style (along with the tandem trend for ‘Midi’ style skirts) due to its use of large flared coats over suit trousers. However, it was not until the 1970s that the maxi dress lodged itself firmly in the American mind (in all its polyester splendor), along with similar caftan and boho styles. By the late 1970s, it had become associated with the unfashionable and out of date (such as Mrs. Roper on Three’s Company)”

But there is more to this story than that, as I recently found out.

As I noted in 2008, the maxi style in general, got its start in popular culture with Doctor Zhivago in 1965. Set in pre-revolutionary Russia, costume designer Phyllis Dalton created  “Cossack blouses with neckband collars and wide billowy sleeves, and coats trimmed with fur from head to toe; and the maxi, or ankle-length, skirt” (Halsey 1986, 595). The film was released theatrically on Dec 22, 1965.

A short seven days later, on December 29, 1965, a little-known Parisian couturier named Jacques Syma photographed what might be considered an early version of a maxi dress as a part of his forthcoming spring collection.

In March 1966, the Paris Spring collections appeared in Vogue magazine, and the cover showed Barbra Streisand in a floral print maxi. Inside, Paris showed off its Spring couture in a fashion feature photographed by Richard Avedon, and including many long dresses worn by models and actresses Jean Shrimpton, Marisa Berenson, Minnie Cushing, Françoise Rubartelli and Geraldine Chaplain (one of the stars of Doctor Zhivago) designed by Balmain, Lanvin, and Ricci. (“Fashion: THE YUM-YUM TREE IN PARIS.” 1966. and Delvin 1966). These dresses were in stark contrast to the mini-skirts and micro-mini’s popular at the time.

One of the first time the word ‘maxi’ appeared in American newspapers was a July 1966 syndicated report from Paris focused on Jacques Syma‘s collection that included the micro-mini skirt and its counterpart the maxi skirt. It appeared in newspapers across the United States (De la Fontaine 1966), helping to spread the style(s) further. Laura Ulmer, Syma’s counter-part was a model, singer, and Ye–Ye Girl (Young, camp-y, French Pop icons of the 1960s)  (Deluxe 2013).

The New York Times later explained that the maxi began “gaining ground” alongside the mini on the streets of New York and Paris beginning in 1966 (Emerson 1968, E4). It became a part of the 1960s Youthquake and had been established in the mainstream by the 1970s. Some might argue that it’s trajectory and popularity coincided with the feminist movement of the era. It would make sense then, to see it re-emerge (and have staying power) in the current cultural climate.

Heather Vaughan Lee is the founding author of Fashion Historia. She is an author and historian, whose work focuses on the study of dress in the late 19th through the 20th century. Covering a range of topics and perspectives in dress history, she is primarily known for her research on designer Natacha Rambova, American fashion history, and the history of knitting in America and the UK. Her new book, Artifacts from American Fashion is forthcoming in 2020 from ABC-CLIO.  More posts by the Author »

Best Laid Plans: What I hope to read this summer

As a part of my need to play catch up (I took on too many projects recently), I’m starting a summer series to share the giant stack of new books that have come through my front door. And you’ll be happy to know that I’m focusing on the good ones! I (and a few contributors), will be covering everything from the fashion illustration history, some major new works cover 20th century fashion history, new works on the field of dress, Hair (and more as the books roll in!) Stay tuned ! 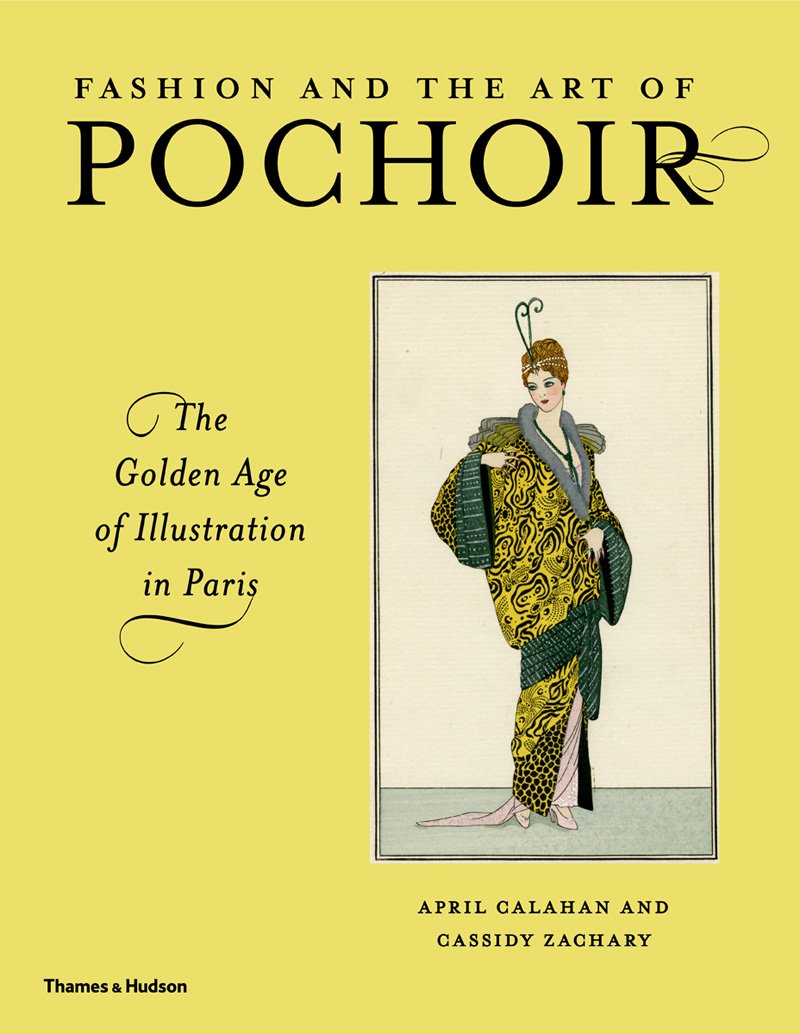 First on my list of ‘must read’s’ this summer is the giant, beautiful and highly informative Fashion and the Art of Pochoir: The Golden Age of Illustration in Paris by April Calahan and Cassidy Zachary (Thames & Hudson, November 2015). The fact that the book is dedicated to Dr. Lourdes Font (“whose passion and vast knowledge have inspired an entire generation of fashion historians”), tells me that these authors are on point and know their stuff (#FontFan over here!)

Highly illustrated and beautifully designed, the book appears to be a happy marriage of style and substance, full of interesting looking, well-documented essays (yeah for footnotes in a legible size!). The book covers 1908-1925, and focuses on the “centuries-old hand-stenciling technique known as pochoir,” though it does include a good many photographs for garment comparison. I love this time period, and love that this book is an easy reference to the well-loved and such famous illustrations and artists. I can’t wait to dig in ! 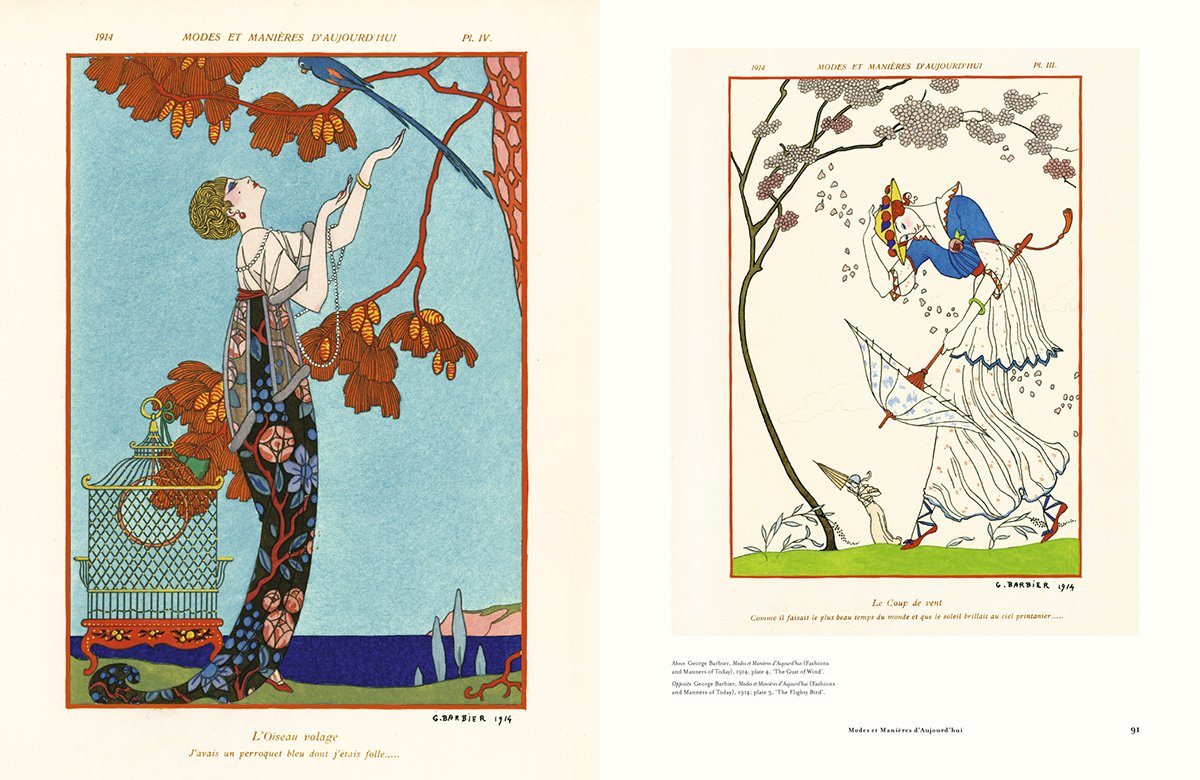 “Collectively, the ten publications featured in this book document a fashion revolution, in terms of both the clothing depicted and the practice of fashion illustration itself. The groundbreaking illustration styles seen in the pages of these albums and magazines were born out of the need to represent the rapid modernization of fashionable dress that occurred in the first two decades of the century.”

Want more? Support the authors and Buy The Book 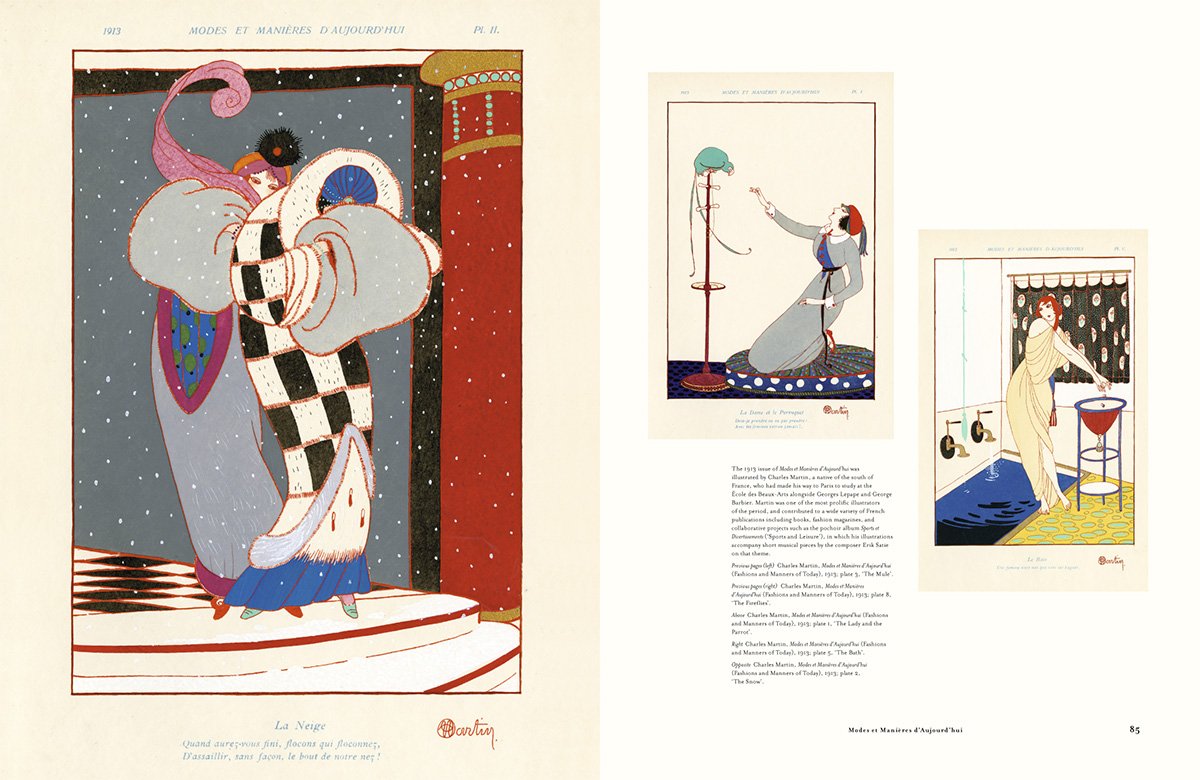 Heather (Vaughan) Lee is an author and historian, whose work focuses on the study of dress in the late 19th through the 20th century. Covering a range of topics and perspectives in dress history, she is primarily known for her research on designer Natacha Rambova, American fashion history, and the history of knitting in America. More on Heather’s career can be found here.

Founded in 2011, Fashion Historia explores the history of fashion (and related events and exhibitions) with a focus on California and the West Coast. It includes book reviews, historical research, theoretical discussion and invites feedback from other scholars in the field. Contact Me Here.

Released just a few weeks ago, Jean Patou: A Fashionable Life by Emmanuelle Polle highlights the extensive private archives of the Patou heirs for the first time. This oversize monograph from Flammarion that Polle spent two years researching, features 250 color and black-and-white illustrations, including the much of the early days of fashion photography (such as those by Baron de Meyer).

The book is divided into three sections: a biography of Jean Patou, his work in Paris, and his work in the United States. Pages are covered from edge to edge with fashion sketches, photographs of garments (sportswear, swimwear, day-wear, etc, gowns), fashion photographs (including both street fashion and studio photographs), focused on the 1920s and 1930s – the height of his powers. It also includes information related to his famous perfumes-Joy and Que Sais-Je.

Though his career lasted a short fifteen years, his use of embroideries, jersey, and interest in day pajamas, and sportswear made him a rival of Chanel. The book also includes discussion and visual representation of the inspiration he gained during World War I-even including some garments he collected and kept as inspirational pieces. The book discusses his clientele, his friends, his lovers and gives an in-depth look at the man and his design work (much of which researched from private letters, diaries, and other previously unpublished material).

This book is a welcome addition to fashion history literature – as it is the first book to focus solely on the short but substantial career of Jean Patou since the 1980s. Jean Patou: A Fashionable Life is one of those rare gems that will be of interest to both established fashion historians, archivists, libraries, museums and  fashion enthusiast alike. Especially those interested in Paris, and the Art Deco period.

For a ‘sneak peak’ of the interior, check out the small gallery below.

* © Francis Hammond, “Declaration” evening top in pale pink silk tulle over matching silk chiffon, embroidered all over with white and silver satin tubes in a geometric diamond motif, Winter 1935. This garment, which belonged to the Princesse Nilfur, was worn under a tuxedo suit with a long skirt and jacket in black satin, lined in the same pink color as the top.