Venice Incognito: Masks in the Serene Republic* By James H. Johnson details the practice of masking in Venice and explores how this practice led to the mixing of all social ranks including nobles, clergy and con men. It is full of stories of the role that masking played in everyday life, but also focuses it’s attention on Carnival and commedia dell’arte. It’s a fascinating look at identity, truth-telling, and appearance.

Throughout his affair with M.M., Casanova relied on the simple half-mask common in eighteenth-century Venice. During his trips to Murano, there was plenty to arouse suspicion–his unlikely devotion to the little chapel, his faithful presence in the convent’s visiting room, his regular visits to a certain green door at the top of the staris. But there was one thing that would not have raised an eyebrow: his mask.

In Casanova’s day, virtually the whole of Venetian society wore masks as daily dress, and not just during carnival. For six months of the year, beginning in the early autumn and ending with Lent, masks dominated the city. They reappeared periodically throughout the summer for civic festivals and ceremonies. Nobles greeted foreign emissaries masked. Venetians entered private receptions and public theaters masked. They heard concerts, watched plays, and danced at formal balls masked. Husbands and wives met for meals masked at inns and hotels. Masked patrons sat in cafes sipping chocolate and reading the gazette, or at lower-class establishments, eyeing other patrons to rob, swindle, or proposition… (47)

In my talking with the author, Johnson points out that “sometimes what we think are ornaments or accessories in dress actually got their start as a response to social needs or situations–in this case, the mask served first and foremost as a way that people in a very segregated society could share close spaces (cafes, the theater, the gambling hall) without going through all the rigamarole of bowing and scraping.” Fascinating to say the least – and I hope to learn more once I’ve finished reading the book.

On a related note, Tricia Roush, the milliner behind House of Nine’s Design, recently attended Carnival in Venice (March 2011) and provided some marvelous photos of how it is celebrated today. Many more are available here. 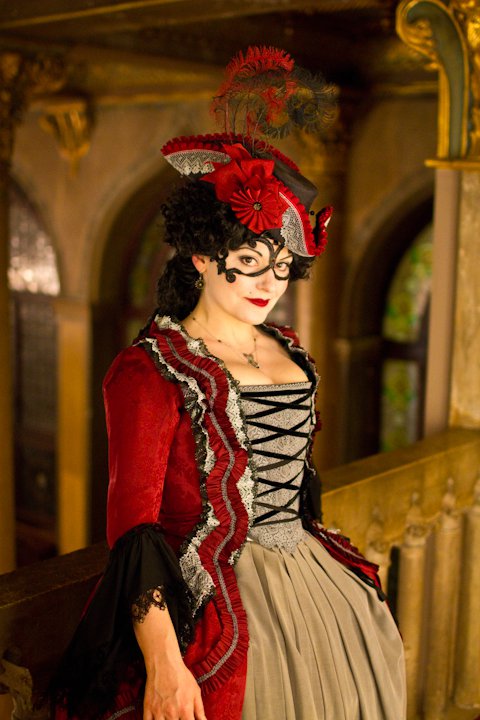 Autumn,  masked and in a gorgeous 18th century gown at the Hotel Danieli on the Grand Canal. Via House of Nines

*Full Disclosure: I am a publicist for the University of California Press – the publisher of Venice Incognito

Beauty: Its study and use