Over the past few months some books have landed on my desk all surrounding the same topic: dress and appearance in early Hollywood. Here’s a quick round-up of these newly available resources (all still on my ‘to read’ list): 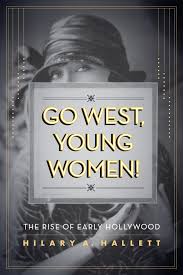 In the early part of the twentieth century, migrants made their way from rural homes to cities in record numbers and many traveled west. Los Angeles became a destination. Women flocked to the growing town to join the film industry as workers and spectators, creating a “New Woman.” Their efforts transformed filmmaking from a marginal business to a cosmopolitan, glamorous, and bohemian one. By 1920, Los Angeles had become the only western city where women outnumbered men. In Go West, Young Women! Hilary A. Hallett explores these relatively unknown new western women and their role in the development of Los Angeles and the nascent film industry. From Mary Pickford’s rise to become perhaps the most powerful woman of her age, to the racist moral panics of the post-World War I years that culminated in Hollywood’s first sex scandal, Hallett describes how the path through early Hollywood presaged the struggles over modern gender roles that animated the century to come.” 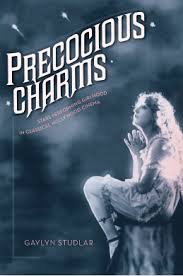 In Precocious Charms, Gaylyn Studlar examines how Hollywood presented female stars as young girls or girls on the verge of becoming women. Child stars are part of this study but so too are adult actresses who created motion picture masquerades of youthfulness. Studlar details how Mary Pickford, Shirley Temple, Deanna Durbin, Elizabeth Taylor, Jennifer Jones, and Audrey Hepburn performed girlhood in their films. She charts the multifaceted processes that linked their juvenated star personas to a wide variety of cultural influences, ranging from Victorian sentimental art to New Look fashion, from nineteenth-century children’s literature to post-World War II sexology, and from grand opera to 1930s radio comedy. By moving beyond the general category of “woman,” Precocious Charms leads to a new understanding of the complex pleasures Hollywood created for its audience during the half century when film stars were a major influence on America’s cultural imagination.”

This exploration of fashion in American silent film offers fresh perspectives on the era preceding the studio system, and the evolution of Hollywood’s distinctive brand of glamour. By the 1910s, the moving image was an integral part of everyday life and communicated fascinating, but as yet un-investigated, ideas and ideals about fashionable dress.”