Lee Alexander McQueen: Love Looks Not With The Eyes 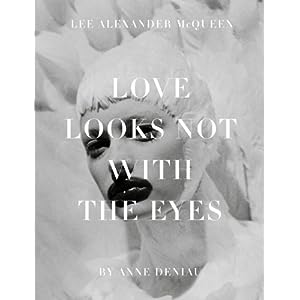 For thirteen years, Anne Deniau was the only photographer allowed full and complete access to the backstage antics of Alexander McQueen’s haute couture shows.  She has just published a HUGE book documenting twenty-six of couture collections – from 1997 to 2010, Love Looks Not with the Eyes: Thirteen Years with Lee Alexander McQueen.

Now iconic dresses are shown moments before hitting the runway’s for the first time – including those in McQueen’s last show, presented shortly after his tragic suicide. This book is a unbelievably gorgeous tribute to his genius: a documentation of his work, his process, and his ephemeral and theatrical fashion shows.

Including 400 color and black-and-white photographs in large format (10 X 13) in seeming high-definition, Love Looks Not with the Eyes presents his growth and development as a designer. It includes portraits of McQueen (formal and informal), as well as an introduction by the photographer, with quotes and comments from Sarah Burton, Christian Lacroix, Kate Moss, Philip Treacy and others.

The photographs themselves vary from intense “High Fashion” photographs, to commercial looking images, to more personal moments almost accidentally captured on film. It’s a remarkable way to see McQueen’s clothes – details, full shots, back shots. Things one doesn’t normally see in the fashion press. It’s a hugely helpful resource to anyone doing research on McQueen. With Love Looks Not with the Eyes, you can easily  fall in love with McQueen all over again or for the first time.*

For more on McQueen see my post from 2010 at Worn Through.

*Happily, Love Looks Not with the Eyes is on sale through amazon at 40% off the original $75 price tag.