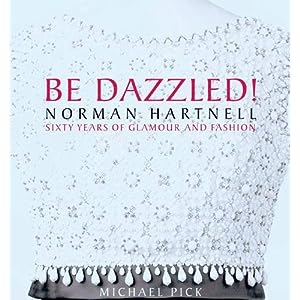 I previously wrote about the influence of Norman Hartnell (1901-1979) on English Royal Fashion in 2009 for WornThrough (See Norman Hartnell: English Designer), and so I was pleased to see this new book on him from Pointed Leaf Press (released just last month): Be Dazzled! Norman Hartnell: Sixty Years of Glamour and Fashion.

For this new book, author Michael Pick utilized unlimited access to the Hartnell archives and provides insights into the designers life and career – including his royal clientele (Queen Elizabeth, Princess Margaret, and lesser Royals). It includes not only examples of his garment design, but also includes shoe designs, as well as “descriptions and swatches from Hartnell’s personal workbooks detail his designs from the Queen’s wardrobe from the 1953-54 Royal Tour.” TBe Dazzled! Norman Hartnell: Sixty Years of Glamour and Fashion will likely appeal not only to design history buffs and fashion historians, but also to followers of the British Royals. Enjoy!

Fashion Photo: House of Worth in 1907