In September 2011, I embarked on what would become a very long knitting project – completed this month, July 2012. It was titled “Mondrian Skyline” and can be found in The Ohio Mills Knitting Book. It appealed to me for a number of reasons – I could wear it, simple construction, easy fitting, but most importantly it appealed to my sense of fashion history. 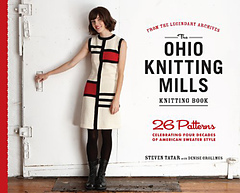 On August 2 1965, Yves Saint Laurent  created a series of the color-blocked wool and jersey shift dresses, inspired by the Dutch Abstract Impressionist, Piet Mondrian, dubbed the ‘Mondrian Look.” With this design, YSL was capitalizing on the growing interest in minimalist and mod fashion of youth. Harper’s Bazaar referred to them as ‘the dress of tomorrow’ and quickly found their way into the mass-market.

But, his Mondrian dresses were not as simple as they appeared. As Richard Martin and Harold Koda have noted, his genius was not only the artistic reference, but in using the color blocks to both accommodate the body and hide the seaming (this is, in fact where my knitted attempt failed – seaming is not my strong suit and my final product is a bit ‘wiggly’). This might be, because YSL’s dress was not actually ‘just’ a shift dress. It in fact, ‘boasts a defined shape and interior construction that allows the double-faced wool jersey to yield gently to the lines of the body. That structure is ingeniously hidden.” (Rubenstein, 128)

Mackrell, Alice. Art and Fashion: The Impact of Art on Fashion and Fashion on Art, London: Batsford, 2005.